Posted at 09:16h in Blog, Uncategorized by JWM3admin 0 Comments 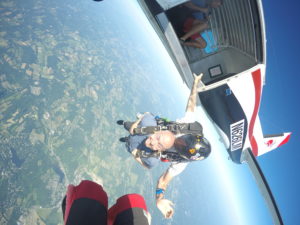 Friday night, my wife and I joined some good friends for dinner to celebrate a couple of birthdays.  We were outside.  It was fun and relaxed and the conversation flowed.  At the dinner table, our host announced that he was going skydiving the next day to celebrate and that there was room for more if any wanted to join him.  The invitation demanded a response.  I had no reasonable excuse other than fear, so I said yes.

Nothing quite prepares you for jumping out of an airplane at 14,000 feet.  Our jumps were tandem jumps.  We were attached to expert jumpers.  Our job was simply to remember some very basic instructions and place our trust in these experts.  The intensity of the experience is hard to describe.  The force of the air as you are in free fall for about one minute is like nothing I had ever experienced.  The advice I had received of, “relax and have fun,” would have been fine in a normal universe in which people do not fall from the sky at a speed of 120 miles an hour.  My dive was photographed and videoed.  My son’s response to a picture I sent to him of me as I exited the plane was, “You look like you’ve just accepted that you’re going to die.”

At around 5,000 feet the parachute did successfully deploy, so I did not die.  But I had trouble sleeping that night, as my body began to process what I had put it through.  Surely, it did not know that it was not going to die, and no matter how I tried to tell it to act, my son’s read, no doubt, was accurate.  I’m not sure that my body will trust me very much in the near future.  Hopefully, with time, we will be on speaking terms once again.

It was exciting and exhilarating.  There was mutual celebration after hitting the ground and boasting about how much fun it was.  But our smiles were mostly involuntary expressions of relief.  It felt good to be heading home to more ordinary experiences.  It felt good to be alive.  Before the jump, I tried to tell myself that my fear had to do with not wanting to abandon my wife, kids and grandkids, but the fear was much more primal.  I tasted my fear of death and celebrated my survival.

The next morning was Sunday.  Time to wake up early and get ready to preach and lead worship.  The Bible readings were prophetic texts–Amos and Jesus.  The biblical prophets speak truth to power and to well fortified egos.  As a result, they are not very popular.  Many of them get themselves killed for their work, like Jesus did.  As I got into the pulpit to read the texts and interpret them, I shared my skydiving experience.  I said that jumping out of an airplane is similar to preaching the prophets.  Both can get you killed.  In fact, the numbers probably favor skydivers more than prophets.  Chutes fail to open about once in 20,000 tries.  For the prophets, the numbers might not be so good.

I used my credit from taking on my fear from 14,000 feet to be a bit more edgy from the pulpit than normal.  The letting go which is required for skydiving is the same letting go which is required for preaching.  The biblical text leads the preacher to a higher vantage point in which we look out at our world from a new perspective.  Then, in an act of faith, the preacher jumps out into the empty space of the moment in which preacher and congregation open themselves to the creative movements of the Spirit.  Will an encounter between the human and the divine occur?  Will ordinary people risk an internal move of letting go into the abyss of a mysterious and all-consuming God?  Will we risk being touched and transformed by the words of the prophets?  God’s word demands a response.  Will we say yes?

As I got ready for the sky jump, I remembered Living School teacher, Jim Finley’s, description of the spiritual life as a groundless fall.  He referenced a study of anxiety and sky diving.  Inexperienced sky divers show signs of anxiety as they get into the plane, as the hanger door of the plane is opened, as they leave the plane, and as they hit the ground.  For experienced divers, they show signs of anxiety only as they prepare to come to the ground, because they know from experience that this is the point where injury can occur.

Spiritual practice is a daily practice of letting go of our attachments, identifications, fears, judgments,and  self-justifications until we are free falling into the infinity of the divine.  Jim Finley suggests that if we stick with the practice, we will discover that the fall is groundless.  We can only scream in fear for so long.  When we realize that there is no ground, we might actually be able to enjoy the fall.  Our letting go begins to reveal itself as an exhilarating freedom from the constrictions of the ego into the life-giving spaciousness of the Spirit.  In the words of my son, we accept that we are going to die.  We surrender to Spirit and allow something new to be born in us.

I’m glad that I jumped this past Saturday.  I see it as a more extreme form of spiritual practice than I usually take on.  But daily, God issues an invitation to me to let go.  Ultimately, it is the same practice.  Jumping out of a plane, jumping into a sermon, jumping into my human defensiveness and reactivity, and allowing the moment to be and to teach.  Eventually our bodies come to realize that in this fall from self, there is no ground.

Sorry, the comment form is closed at this time.